I don’t come across the need to perform a one-sample t-test that often, whether in research or practice.  However, it is a very good entry into learning about two-sample t-tests and ANOVAs, so I teach it early in my undergraduate statistics courses.  I get slightly annoyed whenever I teach it, though, because Excel does not have the one-sample t-test built into its Data Analysis add-on.  Nevertheless, we can trick Excel into performing it for us, which I detail below.  If you have any questions, please email me at MHoward@SouthAlabama.edu.

The purpose of a one-sample t-test is pretty simple.  It tells us whether the mean of a variable is significantly different than a chosen value, and it can be used to answer the following questions:

These questions may be interesting, but they don’t occur all that often in research or practice, and selecting an arbitrary value to test isn’t typically informative.  Nevertheless, some examples in which a one-sample t-test may be useful are:

Of course, there are other situations in which a one-sample t-test may be useful, so keep your eyes open for these situations!

Now that we know what a one-sample t-test is used for, we can now calculate a one-sample t-test in Excel.  To begin, open your data in Excel.  If you don’t have a dataset, download the example dataset here. In the example dataset, we are comparing the test grades of a class to the chosen value of 80. This will determine whether the students’ average grades are significantly different from a value of 80.

Now, we need to start by tricking Excel into calculating the one-sample t-test for us.  Let’s start by typing three things into the second column.  In the first row, type the word “Number” (without quotation marks), which is our label.  In the second and third row, type the number that you want to compare the data against.  In the current example, we chose the number “80”.  So, type “80” (without quotation marks) into the second and third rows of the second column.  Your Excel should look like the image below:

The following window should pop up.  This is where it gets a little confusing.  Although we are performing a one-sample t-test, you should click on “t-Test: Two-Sample Assuming Unequal Variances” and then click on “OK”.  Because Excel does not have a one-sample t-test command, we must trick it into thinking those two numbers that we typed are another sample.  Confusing, I know, but it works! 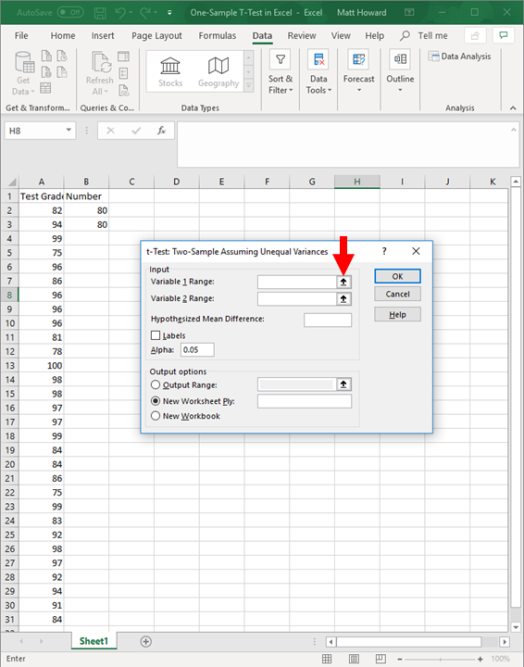 And then click and drag overtop all the data in Column A.  In this example, I do NOT include the label.  Just click and drag on the numbers in the first column, and then press the highlighted button.

And do the same thing, but highlight the numbers in the second column.  If you are using the example dataset, you should highlight the two number 80s.  Then press the highlighted button.

You should get results.  Yay!  Take a look at the image below and compare your results.  Did you get the same numbers?  If so, great!  If not, start from the beginning and try it again. 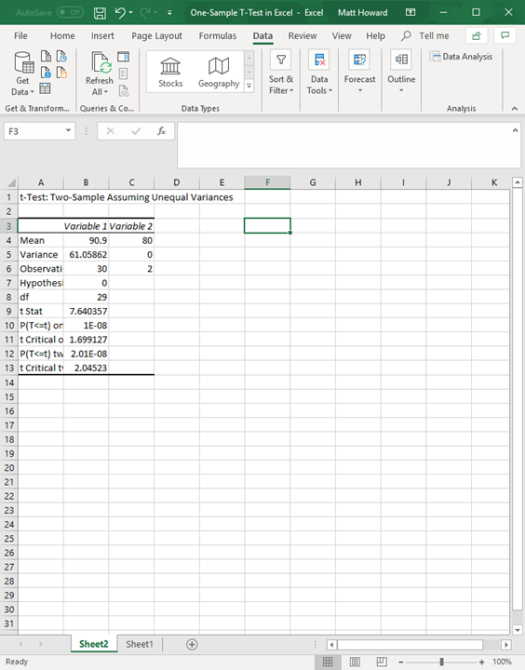 So what do these numbers tell us?  First, look at the highlighted number below.  In the current example, we have an average of 90.9.  This means the class’s test grade was, on average, a 90.9.  Already, we can tell that this is larger than our chosen number of 80.

Now, look at the number highlighted in the picture below.  This is our t-statistic.  It is our primary result or effect size, and it is 7.630 in the current example.  Is that big?  Is it small?  It is fairly difficult to interpret, so it would be best to turn to our p-value. 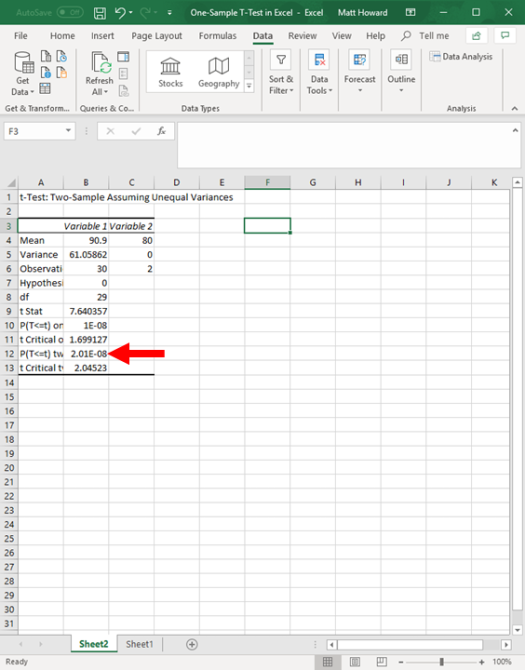 That is all for the one-sample t-test in Excel!  If you have any questions, please contact me at MHoward@SouthAlabama.edu.